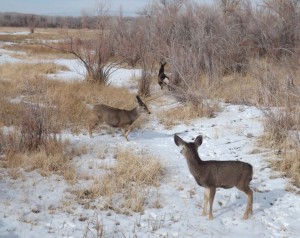 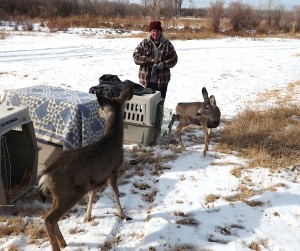 After 6 months of rehabilitative care at the Dayton Valley Wildlife Reststop, three deer were released back into the wild this week.   One of the animals was originally noted as the Bison Fire Fawn.  Wild land firefighters had rescued the animal from the charred mountain top ashes in July. After administering oxygen, they quickly brought it to the Dayton Valley Wildlife Reststop.   6 months of appropriate care &  feeding allowed the animal to grow healthy & old enough for release.  Transported in crates to a backcountry area, the deer emerged from their carriers, appeared to give Evelyn a thank you nod and then quickly disappeared into the hills.  Donations are needed for this type of animal rescue/ rehabilitative work.  Please consider a monetary Christmas gift for current and future emergency care of Nevada’s wildlife.  Mail donations to:  Dayton Valley Wildlife Restop at 230 Imperial Way, Dayton, NV.  89403